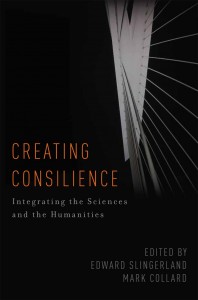 Creating Consilience: Integrating the Sciences and the Humanities (Co-Edited with Mark Collard)

Calls for a consilient or vertically integrated approach to the study of human mind and culture have, for the most part, been received by scholars in the humanities with either indifference or hostility. One reason for this is that consilience has often been framed as bringing the study of humanistic issues into line with the study of non-human phenomena, rather than as something to which humanists and scientists contribute equally. The other major reason that consilience has yet to catch on in the humanities is a dearth of compelling examples of the benefits of adopting a consilient approach. Creating Consilience is the product of a workshop that brought together internationally-renowned scholars from a variety of fields to address both of these issues. It includes representative pieces from workshop speakers and participants that examine how adopting such a consilient stanceinformed by cognitive science and grounded in evolutionary theorywould concretely impact specific topics in the humanities, examining each topic in a manner that not only cuts across the humanities-natural science divide, but also across individual humanistic disciplines. By taking seriously the fact that science-humanities integration is a two-way exchange, this volume seeks to facilitate the creation of a new, shared framework for the sciences and humanities.