What Science Offers the Humanities 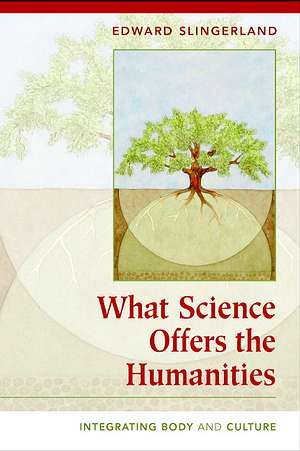 This book examines some of the deep problems facing current approaches to the study of culture, focusing especially on the excesses of postmodernism, but also acknowledging the problems with Enlightenment objectivism. Slingerland argues that, for the humanities to progress, they need to move beyond the mind-body dualism upon which both postmodernism and objectivism are based. Scientific discoveries about human cognition have an important constraining function to play in the humanities, calling into question such deeply entrenched dogmas as the “blank slate” theory of human nature, strong social constructivism, and the ideal of disembodied reason. The goal of this book is to urge humanists to begin taking these discoveries seriously, and to thereby replace the traditional humanities–science divide with a vertically integrated approach to the study of culture. The result would be an embodied, empirically-responsible, pragmatic vision of human reality in all of its cultural and historical complexity.

“There is, or so it seems, no other book that not only shows the importance of current developments in cognitive and neural sciences for research in the humanities, but also elaborates a philosophy of science that goes beyond both modernist and postmodernist interpretations of science….This admirable and engaging book deserves applause and bouquets. What Science Offers the Humanities is consistently clear, comprehensive, and thought-provoking. Overall, it is marvelous how much Slingerland’s book in fact achieves as it attempts to truly integrate important aspects of the humanities and the natural sciences.” – Maurice Schouten, Dept of Philosophy, Tilberg University, from The Humanities as Empirically Grounded Sciences: Evolutionary and Embodied Cognition, Historical Methods: A Journal of Quantitative and Interdisciplinary History, 44:4, 165-170

“For years humanists have been heralding the end of the great age of Theory. But no one can agree on what comes next. Edward Slingerland knows what comes next: a turn toward science. No one with an interest in where the humanities have recently been, and where they will now be going, can afford to miss out on What Science Offers the Humanities.” — Jonathan Gottschall, Washington and Jefferson College

“Inquiry into what it means to be human has been hindered by an artificial separation of the humanities and science. Historically, adherence to this separation has been a minority position – one whose intellectual damage Slingerland shrewdly appraises and sets out to repair. This is an intelligent and timely project.” – Mark Turner, Case Western Reserve University. 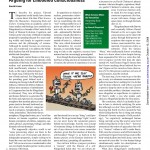 “Intellectually acute, wide-ranging, well-written, and deeply knowledgeable survey of the hard and soft disciplines behind consciousness…For some from the humanities, this book will be a revelation.” — Harold Fromm, Science review 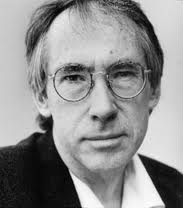 “I greatly enjoyed and admired Slingerland’s What Science Offers the Humanities, and recommend it highly. It not only addresses a weariness and lack of curiosity at the heart of some major areas in the humanities, but is also very adept at summing up the best thinking in the natural sciences. It teems with ideas that will intrigue and delight an open mind, and is also lively and positive in its bridge building. Slingerland shows real intellectual brio. This is an important book.” – Ian McEwan, author of Saturday and Atonement